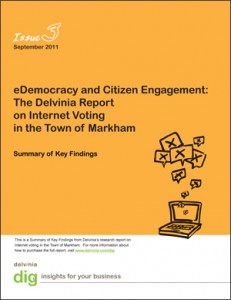 Delvinia has announced the release of its latest DIG report, “eDemocracy and Citizen Engagement: The Delvinia Report on Internet Voting in the Town of Markham.”

This groundbreaking study—based on Delvinia’s involvement in three consecutive elections—provides a comprehensive review of Canadian attitudes toward Internet voting in Canada, demonstrates how Canadians are embracing digital technologies to interact with government and illustrates why the Town of Markham is the ideal pilot site for Internet voting in future federal and provincial elections.

“Given the proliferation of digital technologies, governments are realizing that eDemocracy is about more than simply offering citizens a means to transact or obtain public service information. The future of eDemocracy is about listening to citizens and becoming part of the conversation,” said Delvinia CEO Adam Froman. “Similar to the business world, the idea of creating meaningful and relevant customer experiences has reached government. Governments need to accelerate their efforts to understand the attitudes and behaviours of their electorate towards digital experiences such as Internet voting.”

In 2010, with the support of Ryerson University, Delvinia secured an Engage Grant from the Natural Sciences and Engineering Research Council (NSERC) to commission Nicole Goodman, a PhD candidate specializing in Canadian political institutions and alternative voting methods, to provide a scholarly perspective on the data collected following the 2010 election as well as a comparison to the data Delvinia collected in the 2003 and 2006 elections.

The resulting report provides an independent analysis of the impact of digital technologies on citizen engagement in an election. A special contribution by Environics Analytics using their PRIZMC2 segmentation also allowed for some additional explanatory insight into the attitudes and demographic characteristics of online voters.

“Delvinia is the only organization in Canada that has collected data from three consecutive municipal elections where Internet voting was offered as an option,” Froman said, adding, “This report clearly demonstrates the positive impact that digital technologies, including Internet voting, can have on citizen engagement.”

Key findings from the DIG report include:

Overall, the data suggests that there is broad public support for the introduction of Internet voting in Canadian elections at all levels of government. And, in the case of Markham, Internet voting has been proven to produce some positive effects on the electoral process, namely enhancing electoral convenience and accessibility and thereby encouraging electoral participation.

“Markham has always sought new, innovative and effective ways to connect with and engage our residents. We’re very proud of the work that has been done since 2003 to increase voter outreach and awareness about the importance of voting in a municipal election,” said Markham Mayor Frank Scarpitti. “Our voter outreach and voter turnout in Markham has steadily increased since 2003, with a voter participation rate of 36 per cent in the last municipal election. We’re very pleased that the report released by Delvinia validates our work and confirms that Markham voters are overwhelmingly satisfied with the availability of Internet voting.”

Wendy Cukier, Vice-President, Research and Innovation at Ryerson University, said the research study is an example of fostering innovation in Canada, which is a top priority for economic growth and maintaining our quality of life.

“With Delvinia’s expertise, the Town of Markham has been a leader in using technology to drive innovation and the Internet voting project is just one example,” she said. “Ryerson is committed to working with government, industry and the community to help foster innovation and solve real world problems. Our students and faculty are working on a full spectrum of leading edge projects which are helping to create new products, services and processes. We were delighted to collaborate with Delvinia through the support of the NSERC.”

About the DIG Report

The Delvinia DIG report on eDemocracy and Citizen Engagement is a summary of key findings from Delvinia’s research report on Internet voting in three consecutive elections in the Town of Markham. The DIG report is available online at www.delvinia.com/dig. The full research report is available for purchase through Delvinia. Please refer to our order form to obtain a copy of the report.

eDemocracy and Citizen Engagement: The Delvinia Report on Internet Voting in the Town of Markham