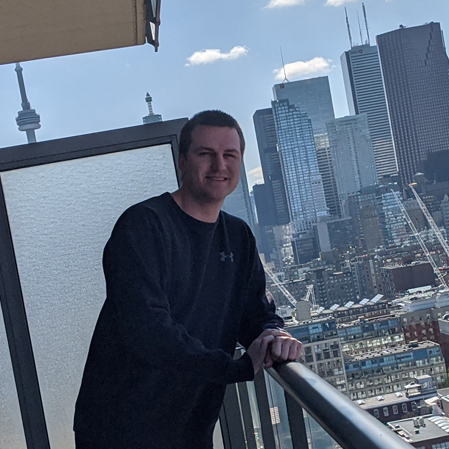 Quarantine in the Concrete Jungle

Having your entire day-to-day routine turned upside down at the flip of a switch is not easy to adjust to. However, we all have to do our part to stop the spread, and help flatten the curve. Living with my girlfriend downtown has come with its struggles as well as kept me sane. Delvinia has done a great job of integrating the work from home policy on such short notice, while still instilling the culture we are known for.

The first week of working from home was an easy transition for me as it had not fully sunk in yet that this is not just for the short term. We have all dreamed of having that extra 30 minutes rest before work, or not having to commute, and now we had it. For my girlfriend, however, this week was hard as she has two jobs – one in retail and one in events. As these were deemed non-essential she was out of work. At this stage we did not know what we were in for.

The second and third week were more of a struggle as the reality of having to constantly set up calls or message channels rather than asking a simple question to the sales pod was setting in. Having Raj set up the Rock, Paper Scissors tournament helped keep spirits high and gave excitement to the work week. Personally, I felt a greater struggle during this time as my exercise had previously been biking to work and walking home after. I could tell that I was getting more lethargic during the day since I was just not moving enough as I live in a 600 sqft. apartment. I was not going out for walks nor was I working out in my apartment. Another struggle I was now realizing was boredom; I had caught up on all my favorite TV shows and watched the movies I was interested in on Netflix. Moving into the next week I wanted to try and change the narrative and make more productive use of my time.

The Easter weekend was especially hard as this is usually when we would go back home and spend time with our families. I made sure to FaceTime my immediate family and spend some quality time catching up. However, we were still down about not having a traditional Easter dinner. That is, until my girlfriend’s mom decided to come down unprovoked and drop us off a couple plates of turkey and stuffing so we too could enjoy an Easter dinner. This really boosted our spirits.

As I began the fifth week, I was focused on using this extra time to become more productive, and get back to exercising as I had previously promised myself. I have gone around the apartment and made a list of chores and to-do items. We all have that list of stuff to do around the house or apartment that never gets done, and I wanted to use this time to get most of my list checked off. I also wanted to learn a new skill I have always been interested in – investing in the stock market. I have now dedicated time to opening up an account and learning how to invest. With the market being down, this seemed like a good time to begin. My girlfriend and I have also committed to 3 walks a week around the neighborhood, as well as downloaded a couple apps for at home workouts. To make sure I am committed to getting my goals completed I have set time slots in my day to work on each.

The biggest fear for me during this pandemic has been the unknown and how fast information is changing. Although I cannot change any of this, having a plan on how to distract myself has enabled me to keep my thoughts positive. Exercising and learning a new skill have kept me on the correct path and I recommend it to keep yourself thinking positively. As well, make sure you are communicating regularly with family and friends as we are all in this together and everyone could use a distraction.