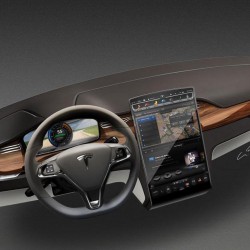 The intersection between digital, social and physical experiences.

During a recent visit to Toronto’s Yorkdale Shopping Centre, I stopped by the new Tesla Motors retail store.  Yes, I said retail store.  If you have not heard of the Tesla brand, take a look. Personally, I love the idea of car brand opening a retail store inside of a mall. The showroom is a departure from the traditional dealership model and the retail store is complete with lots of interactive screens to play and learn.

What really blew me away was the dashboard in the model car. The dashboard has a large iPad like screen situated right between the driver and the passenger. And, I mean a large  17” screen!  There are no knobs, buttons or blinking lights–just one single touchscreen.  It comes complete with maps, media player, rear-view camera, climate controls, sunroof controls and lots of other capabilities, much like a built-in web browser.

My Guest Experience Representative (I love that title) showed me how the screen could be personalized to my colour of choice and explained that it comes with built-in skins and third-party apps.  There is also a well-designed downloadable mobile app that controls many aspects of the car.

It all just works!

As Steve Jobs repeated over and over again at Apple’s product launches, “It just works”.  He was referring to how all of Apple’s products and services were integrated to seamlessly work together.

For years now, automotive brands have been incorporating more and more standalone digital technology into their products. For example, Ford partnered with Microsoft to create Sync, which is a standalone system that powers its media player, voice and mobile phone integration.

Does it all work?

However, the one challenge I still see is the integration of these proprietary systems. Yes, my car can connect to my smartphone via Bluetooth technology to make calls, check emails, text messages, etc.  However, for most Canadians today, their smartphone is the centre of their life. It powers their shopping lists, photos, calendars, maps, music, videos, contacts. And the list goes on and on.  According to AskingCanadians, one in five people say, “My phone touches every part of my life!”

So my question is; Why are car makers still creating proprietary systems?

Ford Sync is a step in the right direction. However with Microsoft  rolling out its latest Windows OS platform, Windows 8, it would be great to see this new OS powering in-car screens and seamlessly integrating with smartphones, tablets and game consoles.  Ok, this all sounds a little scary; one company powering all of those digital touchpoints.  But, for true integration to take place brands like car makers need to stop creating proprietary systems and start integrating with existing platforms.

On Tuesday, General Motors announced that it will be the first auto manufacturer to integrate Siri into its new cars. GM will include support for Siri in its new Chevrolet Spark and Sonic models, which will be available in early 2013. This is a step in the right direction.