QR Codes Seem to be Everywhere, But Are They Going Anywhere? 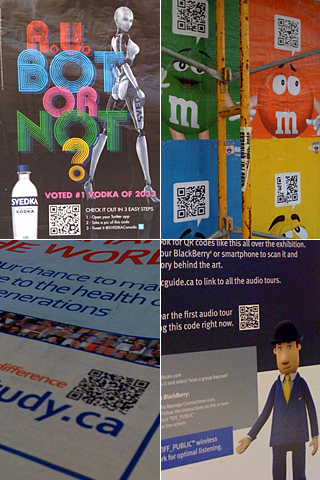 Over the past few years we’ve seen QR codes (Quick Response) used sporadically in various marketing campaigns here in Canada, but have never seen them really catch on. The reasons are varied, starting with the fact that most people don’t know what they are or how to use them.

Recently we showed a QR Code to 500 members of our AskingCanadians™ consumer panel, asking if they knew what it was and how they would use it.

These examples to the right were all spotted within a few blocks of our office in the past week.

In the upper right we have a poster for Svedka Vodka. Svedka uses an interesting approach and doesn’t require a QR code reading app at all. It uses TwittQR, a technology developed by Guelph, Ontario company SpeakFeel. The consumer uses their Twitter app to capture a picture of the code, attaching it to a Tweet along with the hashtag #SVEDKAcanada. The TwittQR system responds with a tweet back to the user containing a link to a video. The poster does a great job at instructing the user in how to use the code, whether they know how to attach the photo using their Twitter app is another thing.

Next, we have a series of M&Ms posters that were part of the FindRed campaign. The campaign asked consumers to find the lost red M&M somewhere within the Google Streetview of Toronto. The QR codes on the posters provided clues to that location. The campaign used a wide variety of technology platforms in addition to YouTube, Streetview and QR codes. The red M&M could be tracked as he checked into real-world locations through Foursquare. Further clues could be found through scans of StickyBits codes on M&Ms packaging. The other coloured M&Ms would seed clues on Facebook and Twitter further integrating the campaign across a multitude of technology channels and making QR Codes an important part of the experience.

The next poster is part of the exciting Tim Burton exhibition currently appearing at the TIFF Bell Lightbox. As part of their support of the exhibition, RBC has sponsored the audio guide, accessible via QR Codes located throughout the exhibition. For those visitors who cannot use QR Codes, the audio guide is available at a mobile friendly site RBCguide.ca. This site provides instructions on using the QR codes and the guide, which is made up of YouTube video files. Free wi-fi is provided within the exhibition so there are no issues with data usage for the visitors.

Not all experiences are as well thought out as the three examples above. This ad is the lower left appeared in the The Metro newspaper for the Ontario Heath Study. A QR code appeared near the URL at the bottom of the ad, however there were no instructions. Once scanned the user is redirected to a standard HTML page, then a second page for language options. The visitor now must struggle through a two-page form before being informed that an email confirmation has been sent to their email. The email contains a link that once clicked again loads a standard html page not optimized for mobile viewing. By now I had used up at least half of the 17 minutes of time promoted in the ad, and could not continue the survey. Considering the original ad appeared in a commuter paper, it should be expected that most users would be trying to engage through their mobile devices.  The initial signup form could have been simplified to ask for nothing more than their email address, allowing the user to access the survey later on in the day from their desktop.

Think about the user

The simple takeaway from these examples is “Always think about your user”.

Provide instructions; the user may want to participate but may be at a loss to understand how.

Provide alternative access; allow the user to access the information through a simple URL. Think of the environment, are users walking by, driving by, is the location too dark? If they are accessing larger media files, is free Wifi provided in the area?

Provide value; whether its coupons or a clue in a bigger campaign, provide value. The user is going out of their way to engage, make it worth their time.

Provide content suitable for mobile; if you are engaging a user through mobile technology make sure that the experience you are directing them to is optimized for mobile and specifically for their device.