Delvinia Dig Vol 1: Managing the Hype – The Reality of Mobile in Canada 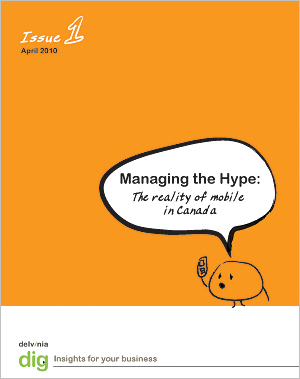 The number of Canadians purchasing smartphones may be rising, but an overwhelming number of Canadians continue to use their mobile devices for the most basic functions – texting and taking pictures, according to Delvinia Dig, a quarterly report on the digital behaviours and attitudes of Canadian consumers.

In fact, according to Managing the Hype: The reality of mobile in Canada, the most mobile savvy group – NetGeneration (18-30), do not fully leverage mobile applications including Facebook mobile (22%), GPS/mapping services (21%) and Twitter (6%). Even Canadians with smartphone devices (Blackberry, iPhone and others) keep it simple when it comes to features and functionality.

“While the number of smartphone users in Canada is exploding, an astounding number of Canadians continue to rely on the more traditional features of their mobile device,” said Adam Froman, CEO of Delvinia. “Mobile is definitely an emerging platform, but before it can be fully leveraged, it’s imperative to understand how Canadians are using their devices before building applications and mobile campaigns.”

Marketers hoping to reach a wide audience with new mobile campaigns should take a closer look at their target audiences beforehand or they could be very disappointed, as a large number of Canadians don’t use more than basic functions like sending and receiving text messages and taking photos.

Delvinia’s 2009-2010 study of Canadian mobile behaviours conducted through AskingCanadians™ revealed a number of insights companies should consider before falling victim to the mobile hype.

GPS Awareness and Usage
GPS awareness and usage on smartphones is still relatively low among Canadians and across generations:

Mobile Applications
Responses from those surveyed seem to indicate confusion over what a mobile application is:

Mobile Cameras
Well-used by all Canadians the mobile camera is a straight-forward, easy-to-use feature used often by consumers. Interestingly, while the majority of smartphone owners are taking pictures with their mobile devices, most are not using the more complicated functionality for sharing the pictures they take.

Mobile Gaming
Primarily adopted by younger Canadians, mobile gaming is especially prevalent with NGen and GenX groups who grew up with video games. And while there are opportunities for companies to create augmented-reality or location-based games, Canadian users may not be ready:

“The insight uncovered in Managing the Hype: The reality of mobile, is just one example of the commitment we have to thought leadership at Delvinia, ” added Froman. “Our unwavering dedication to and direct access to Canadians through our proprietary tools is what sets us apart from other digital agencies and can give a company an edge over their competitors in today’s challenging economy.”

Delvinia DIG is a quarterly report prepared by Delvinia Interactive based on data generated by AskingCanadians™ and its French counterpart Qu’en pensez vousMC a proprietary online consumer research panel. In October/November 2009 Delvinia conducted its annual re-profiling of AskingCanadian panellists and extracted a statistically representative subset of 5,680 responses (50/50 gender split, age and province breakdown per Stats Can) and discovered high mobile phone ownership in Canada, but relatively basic mobile phone feature use. A follow-up survey was conducted in January 2010 with 1,000 statistically representative AskingCanadians smartphone users to uncover further insights.